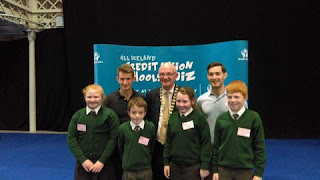 Well done to our team of Bridget, Eimear, Oscar and Adam who really
did us proud in the All Ireland Final of the Credit Union Quiz in
Dublin on Sunday 2nd April. For the second year running they competed
in competition B, under 13 along with 49 other teams and finished
joint 13th of the 50 teams, only a mere 5 points behind the winners.
Pictured with Ireland's Olympic rowing silver medalists Gary and Paul
O'Donovan and Brian McRory, President of the Irish League of Credit
Unions.